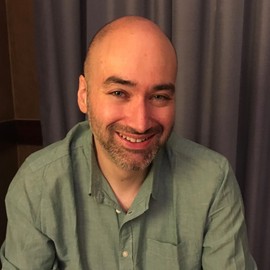 Michael is a Professor and Personal Chair of Robotics at the School of Informatics, University of Edinburgh, and the Director of the Centre for Doctoral Training in Robotics and Autonomous Systems at the Edinburgh Centre for Robotics. Michael’s research focuses on the principles behind dexterous movement and control in robots and humans, particularly in environmental contact. This work spans operational space control, redundancy resolution, stochastic optimal control, and dynamics model learning and has been applied to compliant legged locomotion and manipulation for mining, offshore energy and the nuclear industries. Previously, Michael was a Senior Lecturer at the University of Birmingham, a postdoc at the Disney Research Lab at Carnegie Mellon University, a researcher at the ATR Computational Neuroscience Lab in Kyoto, Japan, and a Phd student in Stefan Schaal’s CLMC lab at the University of Southern California.